Volunteers at Tāwharanui are fortunate to have the opportunity to keep in touch with the natural world and adapt to the changes. And changes in nature can happen quickly. So as well as monitoring bird species, volunteers are now monitoring cat traps. Twenty-five cat cages have been
set out around the Sanctuary to catch feral cats that have arrived with the invasion of rabbits.
One might ask, how did all these pests slip under the radar? Rabbit numbers quickly exploded with less on-site management during Covid-19 lockdowns, followed by a number of other contributing factors. And according to the Department of Conservation; where you have rabbits, you have cats. Fortunately cats will eat rabbits before birds because they are easier to catch and provide a better meal. It appears that not only have cats sneaked around the ends of the pest proof fence, as seen by fixed, motion-sensor cameras, but they have also bred in the Park. Luckily, Park ranger Maurice Puckett has adapted to change and become as clever and devious as the cats, by using a range of tempting baits from fresh rabbit meat to soft toys doused with male cat urine!

Auckland Council is having a plan prepared to eradicate the unwanted invasion of pests. Hopefully in the meantime action will continue on the ground, or the problems will grow bigger. Action, change and adaption to the change needs to happen as quickly as the problems occur. The longer they are left, the bigger the mess. This applies to animal pest incursions as well as weed break-outs.

Over the summer, volunteers at the information trailer helped Tāwharanui visitors understand the complex intricacies and delicate balance of nature at the park. We have engaged one-to-one with thousands of visitors again this year even though there were no overseas tourists. It was surprising how many of those visitors were international New Zealand residents. These families have had to adapt to a new culture and make changes without the support of immediate family, left behind in countries which are at present inaccessible.

This season a pair of tūturiwhatu (New Zealand dotterel) adapted by making a mid-season change of nesting territory. Their nest, near a beach access way that was quiet when set up, most likely became intolerable when weekend crowds of
people arrived at the beach. They abandoned the site and shifted to Next Beach, a small bay along from Anchor Bay on the lower Ecology Trail. Here they successfully hatched chicks. They shifted again with their tiny chicks back around the rocks to the Anchor Bay tūturiwhatu enclosure. Fortunately the two pairs of tūturiwhatu from that enclosure already had fledged chicks and left the territory. There might be a battle over the enclosure next year when they all return to nest. It is all part of the evolutionary process. Throughout greater Auckland tūturiwhatu have adapted to non-coastal nesting sites that are always near moisture, such as in paddocks, sub-divisions and open spaces where invertebrates provide the food source. It could be that these breeding sites avoid the constant disturbances on hot sandy beaches from hundreds of human beach-goers. These novel sites also help avoid overcrowding in the usual tūturiwhatu nesting territories. Tūturiwhatu on these sites encounter a whole new set of nesting challenges to adapt to.

It seems that we too as a human race are going to be making some adaptations in the near future for the survival of the planet. Let’s make those moves in time to make the planet sustainable. We can help in a small way by planting more trees. So please come along to our tree planting days on the first Sunday of each month starting in June, 2021. 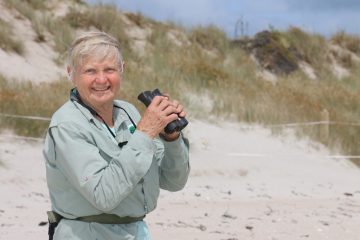 By good luck and good management, hundreds of volunteers planted 17,000 trees from the TOSSI nursery before the Covid Delta variant struck, locking Auckland down for seven weeks. Planting the steep and slippery slopes of Read more…

Next year TOSSI reaches 20 years! It will be a time for celebration of all the achievements at Tāwharanui. A book was suggested to follow up on The First Ten Years written by Maggie Cornish, Read more… 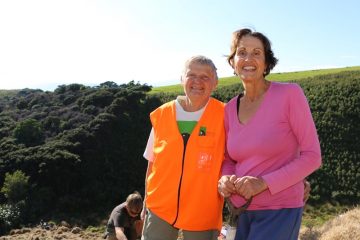 Sometimes in the city, when you see everyone frenetically rushing about on their daily business, you wonder if we are ever going to reduce our emissions, save our planet and its wildlife. Then you come Read more…